Seriously? A zombie TV series?  It's so nice when pop culture agrees to conform to my favorite things. AMC's "The Walking Dead" has everything a zombie movie needs: character-driven drama, gory scary zombies, moments of sheer panic, suspense and dread a-plenty ... and surely more.  I'm not sure how I missed out on the comic that the series is based on, but for now I'll stay (mostly) spoiler-free and just watch AMC's version.

(Yes, our hero rode a horse into zombie-infested Atlanta. Guess who didn't make it out alive?)

I recently converted Seth to reading Connie Willis.  He's plowed through all the available time-traveling historian novels that she's written -- and I told him that no, he was not allowed to stay up until midnight to read the new one ("All Clear") being released on Oct 19th. :)  He'll no doubt read that one in short order ... so my question to you, dear LJ, is this:

What other time-travel novels would be of interest to an 11-year-old boy?

He's not super interested in romantic plots, so "The Time Traveler's Wife" is out.  I'm also still avoiding explicit sex and "too much" realistic violence (whatever that means) in movies/books/video games for him.  (He's allowed to play Warcraft III and Dragon Age: Origins, but not Grand Theft Auto or God of War etc., for example.)

I just had my annual physical with my doctor ... this took some extra legwork to set up, because she left the group practice in Tewksbury last fall, and they wouldn't tell me where she went.  I tried Google, and found the place she interned ... and THEY at least would tell me where she landed.  Until yesterday, all I knew what her new address and phone number.

BUT -- I was so impressed with what she's doing, that I had to share.  At the Tewksbury practice, she had become increasingly frustrated with the time pressure to see more patients more quickly, and she felt she didn't get to see her own patients, because the process of slotting in same-day appointments didn't match patients & doctors. She wanted to practice whole-family, whole-life medicine, but they didn't do OB, so she had to send her patients elsewhere to have babies ... and on and on.

What she eventually did was buy an existing small practice from an older doctor (I assume he is in the process of retiring).  Most of his patients are elderly, so she joked that she bought a geriatric practice, but what she really wants to do is follow individuals and families for there whole lives.

Personality-wise, my doctor is young (defined as younger that me, ha!), friendly, and chatty.  Both this time and the other two times I saw her, she seemed genuinely interested in me as a person, as opposed to just me as a body or (worse) me as a set of data in a computer. When I was filling out new patient forms in the lobby, she spotted me from behind the counter and waved enthusiastically -- she seemed to remember me on sight, and she also remembered a lot of my medical history even though her computer was down for the day.

Medicine-wise, she is respectful and informative.  She is willing to put a couple options of "what it could be" out there, and talk through which one we want to pursue.  She assumes that I'm intelligent and know what I'm talking about. She did not berate me for gaining weight, but asked about my plan to get back on track, and then suggested a followup visit in 3 or 6 months (my choice!) to make sure the plan is working. Best of all, she talked to me FIRST in her office, with both of us sitting in chairs -- so much nicer than sitting on an exam table with my butt hanging out of a wispy gown!

ANYway, when I have an experience this good, I want to share.  Her office is located in Burlington, but she plans to move to a more accessible building in the next few years.  Her plan is to stay within 5 miles of the current location, heading (perhaps) towards Lexington.  If you're in the market for a doctor, let me know -- I'm happy to share her contact info privately.

I listened to an NPR show that was all about whether or not ma'am was offensive -- the conversation was prompted by Senator Boxer's request that she be addressed as Senator, not as Ma'am, by an officer in the Army that was giving testimony or something.  (link)  The women discussing the issue speculated about the reason women were more likely to be irritated by ma'am than man are by sir.  One idea that they bandied about was that women "graduate" from "Miss" to "Ma'am" and that the latter implies that they are aging.  I found myself thinking that it had more to do with being married or not, and draws attention to the out-of-date idea that a woman's status derives from her married (or not) status. Then I wondered if the "honorifics" are used pseudo-ironically -- fake politeness -- when addressing someone of lower status in an interaction -- as in, "Miss? Miss? I'd like to place my order now."

I'm curious about MY circle of friends ... I guess mostly the women :).

Have you been called "ma'am"?  If so, how old were you the first time? What was the context? How did it make you feel?

Do you use ma'am and miss to address women?  As in, "Excuse me, ma'am, you dropped your wallet."

For me, I've never been irritated or offended, but I have been amused -- I feel the same way when a mom introduces me to her kids "Mrs. Henry" -- I find myself thinking, who the heck is that? Oh! That's right, I'm a Mrs. and a Ma'am. :)

Late last night I published my second-ever knitting pattern on Ravelry: the Wibbly-Wobbly Cowl, made of Knit Picks Felici in the gorgeous "Time Traveler" colorway. (Doctor Who fans in the crowd, can I hear you say TARDIS?? :) ) A few minutes ago, Wibbly Wobbly officially beat my first pattern for number of downloads in a single day. Zaza peaked at 71 downloads on it's 2nd day of publication -- Wibbly Wobbly has been downloaded ... (excuse me while I hit "refresh") ... 79 times today! And it's only 8:15 PM :). 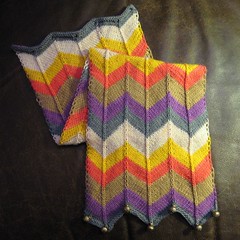 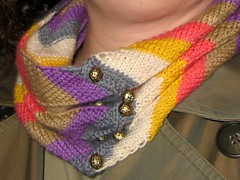 Weekends like this one are what I love about agility -- despite the heat/humidity and the occasional goofy run, Gromit and I had a great time and did well. I had so much fun sitting & chatting with friends while watching runs. Snooker and Jackpot are the most fun to watch, because there are so many ups and downs and near misses and last nanosecond saves!

Turning of the teapot and wandering off is not the same as making oatmeal and instant coffee.

To astonishing success! 4 of 4 Q's & 1st's. And of course, Gromit did flawless contacts for Eli, including on the dogwalk ... 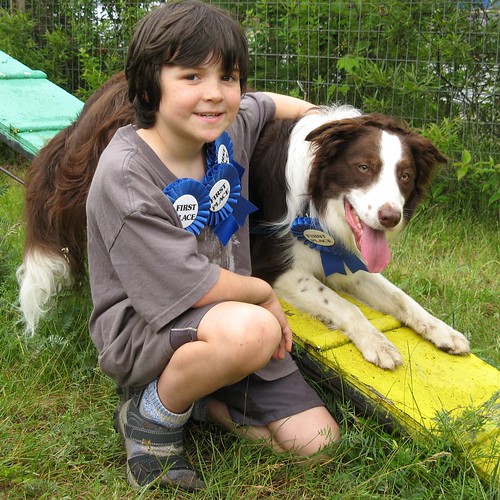 (Sorry, no pix -- I'm trying to get my design published and pix on the Internets are verboten.)

Still in progress:I've been so good at finishing up projects (click) that I'm going to allow myself to cast on something new!  I'll be making socks from the Blue Moon Fiber Arts "Rockin' Socks" sock club yarn, which arrived recently.  So, new item:

I made something purty!  (Rav link: Mandala Shawl)
( Collapse )﻿

Still in progress for my 52 in 52 challenge: